The last day started fine after a dry night but with the forecast of rain for later in the day. In order to ensure the tents were put away dry, the finds team set to work collecting up all the equipment not in use and taking down and packing away the tents. 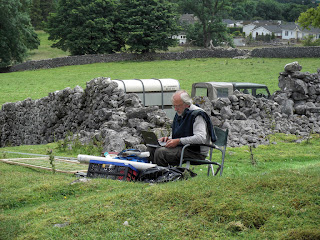 All the tents are packed away   Photo © Pat Carroll
Meanwhile the area attacked with mattocks yesterday was scraped clean so that Roger could decide that after many years of work on DF the site had finally reached natural. 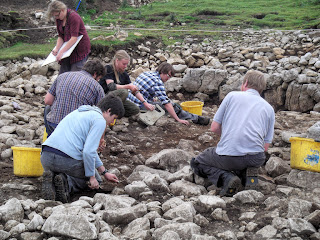 The last use of trowels   Photo © Pat Carroll
The last plans were drawn, the surveying was finished off and the last photograph taken so that after lunch all that remained was to backfill. It is as well that the previous finds team members visited the site yesterday as they would have seen a rapidly disappearing trench today 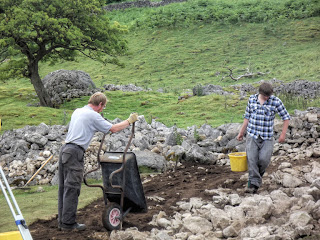 The backfilling begins   Photo © Pat Carroll
By the end of the afternoon a group of exhausted people staged down the hill for the last time. At least the backbreaking work shifting  four years worth of excavated rock back into the hole had dispelled the hangovers from the farewell party for Michelle put on by The Blue Bell in Kettlewell the night before. 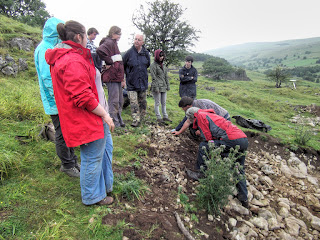 The final team   Photo © Pat Carroll
So with a collection of over 550 different finds bags, the 2011 Chapel House Dig ended and we now must look forward to what 2012 may bring. 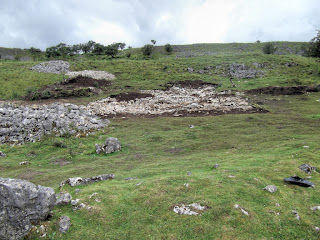 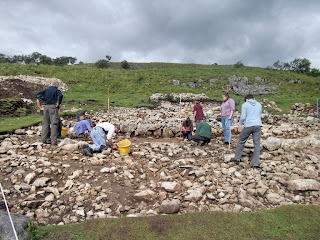 Photo © Pat Carroll
Today the wind changed direction and the weather improved so much that, as you can see, the first task was to remove the poly-tunnel. 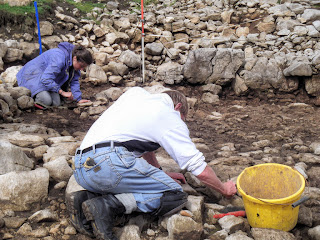 Photo © Pat Carroll
The main aim was to clean up the whole of the area ready for the last photographs to be taken. This did however result in a flurry of last minute finds 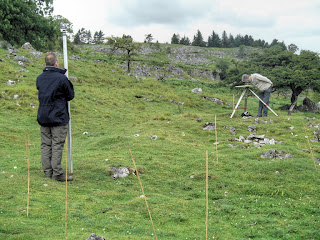 Photo © Pat Carroll
In the meantime Don and James were busy drawing a detailed 1:100 plan of a yet untouched area at the opposite side of the central track-way, which might just possibly be the target for a new trench next year. 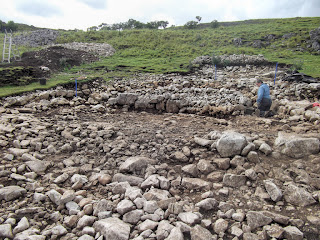 Photo © Pat Carroll
The photographs have been taken and the plans drawn, so take a last look at the area before it disappears forever. 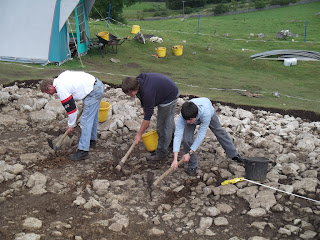 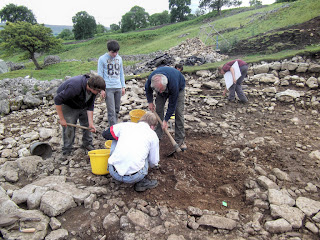 Photo © Pat Carroll
Whilst the last plan is being finished in one corner, Roger is keen to see if we have finally reached bedrock and has joined the mattock team.
Pat Carroll
Posted by Upper Wharfedale Heritage Group at 21:47 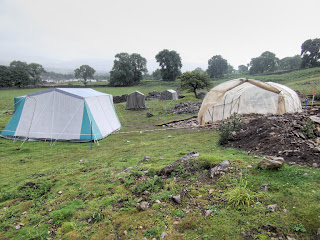 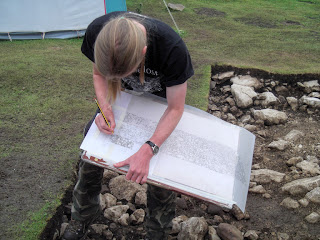 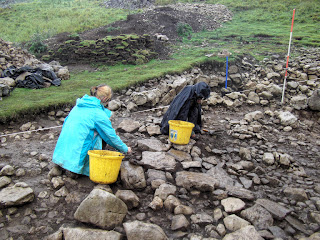 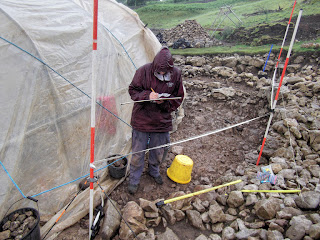 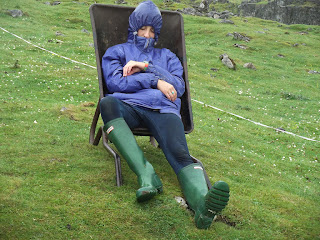 With almost everyone now deployed on recording the site there were very few finds to occupy the Finds Team.  Pat and Phil therefore busied themselves reconciling the find locations plotted by our Total Station with the manual records taken by various Finds Team members over the past two weeks.  With over 500 finds this was no quick job.
Some of the recording took place in the polytunnel.
But some recording was taking place outside the tunnel, and sometimes it rained.  The drawing paper is waterproof, but how about the humans?
Vera Brearey
Posted by Upper Wharfedale Heritage Group at 14:21

Somewhat better weather today.
Cleaning the newly excavated area ready for photography and planning continued, with the ground still very sticky.
Some possible features were spotted, including what may be some sort of drain set into a levelled floor area.  As always, though, it is hard to be sure.  A possible post hole from the first week of the dig turned out to be a mirage on further excavation.  Sometimes what looks like rocks and soil in an exciting layout suggesting a feature turns out to be just - rocks and soil.
By the end of the day the area was declared ready for photography and Roger climbed his stepladder for the photoshoot, with Don and Doug providing support (for the ladder).
Vera Brearey
Posted by Upper Wharfedale Heritage Group at 14:16

This morning was very wet indeed - a cats-and-dogs, coming-down-in-sheets, throwing-it-down morning.  After hurriedly erecting the tunnel over the dig area everyone retreated to tents to wait for the skies to clear a little and (optimistically) for the ground to dry out a little too.  Roger took the opportunity to gather the undergraduates in the big tent for a session on the project report they need to write for their course.  Eventually, towards late morning, the rain slackened off and work got under way.
As we enter the last week thoughts turn to recording, so some of us set to work on the scale drawings of this year's dig area.
The remaining diggers set about cleaning the latest layer, ready for photography.  This layer extended beneath the paving stones found on earlier digs, so all eyes were on the lookout for evidence of cobbles or other relevant features for evidence of an earlier structure.
Vera Brearey.
Posted by Upper Wharfedale Heritage Group at 12:33

While everyone has been slaving away on the hillside, work has also been progressing at Ghyll Cottage.
The students have spent one or two days there, one or two at a time, in order to learn about the intricacies of post excavation work, and with Ruth (senior) on hand in case any problems should arise.
To date, they have been kept busy investigating the soil samples for hammer scale and for charcoal. Chantelle and Emerald have inked up their plans; Peter has been cataloguing and recording his cache of snails; Emerald has been drawing the quern and always there are finds to be washed and recorded - not so many bones this year, but a fair amount of clinker has appeared.
The students appear to enjoy their time at the cottage, probably greatly helped by having the luxury of the bathroom and the regular cups of coffee, (drunk while working!) Not to mention the delicious smells which emanate from the kitchen, when Rebecca is cooking.  (Also the opportunity for the occasional sampling of these as well......!)
This last 2 days have been quiet with no students, but it was not lonely as Don was there slowly recuperating. I am pleased to say he looks better all the time – just wanted a rest really!
It is good to be on top of the finds.........
Ruth (senior)
Posted by Upper Wharfedale Heritage Group at 07:41